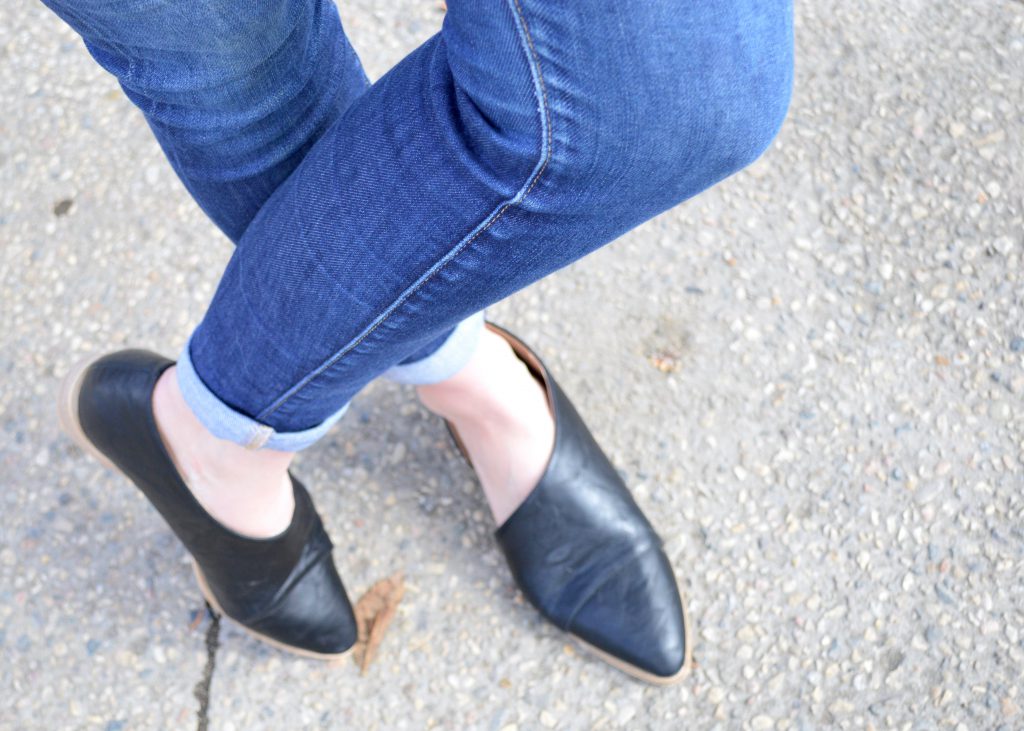 I admit, I am heavily influenced by the net! I see something and I need to have it. Cue, the shoe with the side cut out… seriously this is what I called it for over a year because I didn’t know how else to describe it. I looked and looked but imagine searching (on Google) “Online shop, flat shoe with cut out on side” and then I have to put “ship to Canada” ontop of all that! To my disappointment, months and months of searching would come back without success, that is until a quick trip to Minot, ND. My son was playing hockey there and we happened to be staying in the hotel connected to the mall. Within minutes of entering, I spotted the “shoe with the side cut out” and got extremely excited! I basically ran to the store, asked the sales lady if they were comfortable and was sold after she smiled while saying I “wouldn’t find anything better.” The first thing I did once I completed my round of the mall, was head to our room to put on my shoes I had been obsessing over (for the last 14 months!)

You can picture it now, I felt so satisfied, walking in my new shoes.. that was, until… I seriously couldn’t walk anymore! Within 30 minutes I had the worst blisters and this wasn’t just a case of “breaking them in.” I had blisters on-top of blisters and then next thing I knew, my feet were bleeding. (I’ve actually never had this happen- horrible!) I was heartbroken.

Many laughs (and bandaids) later from the hockey moms at the rink and someone mentioned I should check the brand “Free People.” Once I was home from my quick weekend trip I started the search again, but this time with a brand in mind as well. Low and behold.. they had been the shoe I originally fell in-love with but because I always have the joys of shipping to Canada once I added in exchange and duty they were almost $350.00 (which wasn’t going to happen.)

I was almost at the point of believing I was not meant to own a pair of these adorable flats until I was scrolling instagram before bed and found a much more affordable and equally as cute pair! Uptown Casuals (@uptown casuals) had posted that day that they had their “Carter” flat in stock and they were only $78.00. (Described as ” flats that offer a curvy side cutout, making them perfect for spring transition.”)  Quickly ordering a black and a brown pair (because $78.00 is a far cry from $350.00) I had to wonder, how had I spent so much time and effort to finding these shoes, just to have them appear at a store in a neighbouring city?

I going to go on a limb and say, these shoes… from Uptown Casuals were meant to be!
Click here to buy a pair yourself, they come in 5 colours! A passion for things that make me happy. A full time working mom (to three energetic hockey players) and proud wife.